We’ve recently heard from the Intellectual Property Office of Singapore that it plans to close off the foreign route for Singapore patent applications and to abolish supplementary examination. 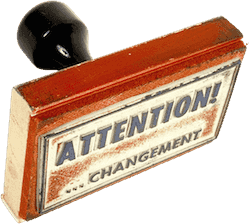 Under the proposals, it will no longer be possible to request supplementary examination to rely on the grant of a foreign corresponding application for Singapore applications filed on or after 1 January 2017 .

Only applications that have been examined for novelty and non-obviousness under Singapore patent law will be allowed to grant as patents in Singapore.

Patents Form 8 and its Quirks

Patents Form 8 is the “Statement of Inventorship and of Right to Grant of Patent (PF8)”.

The current version of the form requires the following information on each inventor to be provided to IPOS:

Filing a Statement of Inventorship

Under the Patents Act, there is an obligation for an Applicant to name the inventors in a Singapore patent application. The Applicant is also required to disclose how he derived the right to be granted a patent from the inventors.

Because of this, it is crucial that a statement of inventorship is filed at IPOS within the relevant time limt.

Statement of Inventorship Not Required? Not True

Since yesterday’s post on the topic of inventorship in Singapore, we have been made aware of some potentially misleading information on the Internet: 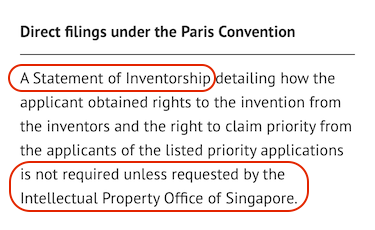 This passage appears to indicate that a Statement of Inventorship is not required to be filed, unless IPOS calls for it.

If so, this statement couldn’t be more wrong. In fact, if you don’t file a Statement of Inventorship in time and wait for IPOS to ask you to file it, you might end up with a patent application that is treated as having been abandoned!

This post is part of a series exploring inventorship of patents and inventions in Singapore.

Under Singapore Patent Law, in the first instance, a patent may be granted primarily to the inventor or joint inventors of an invention. Section 2(1) of the Patents Act helpfully defines an “inventor” as the “actual deviser of the invention”.